ARCHIVE:  EVIDENCES OF A WELL & MISSPENT LIFE - SO FAR!
VARIOUS PROJECTS BY TONY WHITE ~ SOME COMPLETED AND SOME YET TO FIND FUNDING

Over the years, Tony White has done what he could to create innovative hand-=drawn animation projects and has personally funded a number of project developments that he had dreamed would find support. But alas, it was not to be. Now all he can focus on is working through his legacy projects with the time he has left.

In the meantime, it might be worth sharing just some of the archive projects that Tony has been responsible for - to show that he at least made some kind of effort to keep the great tradition going. The following begins with the most recent, all the way back to the most distant of analog projects that he has produced and/or developed.

"2D ACADEMY" - COURSES PROMO: These days, Tony is heavily committed to teaching - i.e. passing on the extensive knowledge and experience that he has accumulated in over 50 years as an award-winning master animator - through his own "2D ACADEMY" in the Pacific Northwest. This is a relatively recent promotional short film for his courses, featuring much of his students' work towards the end. (Note: Most of Tony's students these days are at the high school level - for high school graduation credits - although more adult and/or established animators are joining his classes.)

REVENGE OF THE FLY:  A few year's ago, Tony was asks to create a short introductory trailer for the Seattle International Film Festival's "Fly Film Challenge". With permission, Tony reworked his trailer into a short, 1-minute film, entitled "Revenge of the Fly", which has proved popular in the animation festivals he has entered it into.

"NODOR "- COMMERCIAL: Tony was asked to create a short web-targeted commercial for the "Nodor" school of astrology in Beijing. It was created in just under 3 weeks, with Tony working single-handedly.

"STAR*YOU" ~ WORLD'S FIRST ANIMATED HOROSCOPE: Inspired by the success of his "Nodor" web ad, Tony produced the world's first animated horoscope service - under the "STAR*YOU" banner - and personalized to each individual, based on their actual date of birth. This animated sample was compiled to demonstrate what one looks like - actually based on Tony's own date of birth!

DRAWASSIC SHOWREEL 2012: Back in 2012, Tony created this showreel compilation of just a little of his work, to show the range of styles and techniques he has worked on. Most of this material was working in a traditional, hand-crafted, analog way - although some of the work was created in a digital environment.

DEMO (MUTE) FOR A PROPOSED ASTROLOGICAL PHONE APP: Further back, a local professional astrologer, the late Jeff Jawer, asked Tony to create an animated simulation of the phone app he was hoping to produce. Unfortunately, the funding for the app was never found.

"ARNIE MADE ME DO IT" - PROMO: This promotional trailer for "ARNIE MADE ME DO IT" was the forerunner of Tony's current legacy project, "THE OLD MAN MAD ABOUT ANIMATING". Essentially it was planned as a celebratory movie of top quality, traditional 2D animation - shaming Hollywood for it's indifference and antipathy towards the traditional, hand-drawn, animated art form. Perhaps not surprisingly, the project never found its funding, hence it eventually evolving into it's current, more personalized "TOMMAA" version.

"BAD PENGUIN" - PROMO & CONCEPT ART: Failing to attract support for his more conventional, family-based projects, Tony decided he would like to create something more dark and suitable for a more mature audience. "Bad Penguin" was written by Phil Clarke Jr. and his couldn't-put-down screenplay for the story so excited Tony that he created this short trailer to hopefully attract independent production finance. As ever, for traditionally animated projects in the USA, it neither found funding or support. The concept development art below - especially the poster design - gives just a hint of the direction the full film production would take.

"SPIRIT OF THE GAME" ~ PROMO: Another project that Tony was inspired by - enough to invest in this "SPIRIT OF THE GAME" promotional trailer - was a beautifully inspirational story created by author and artist, Geoff Francis, endorsing the memory of the late, great British soccer legend, Sir Stanley Matthews. In a way somewhat reminiscent of the inspiration behind the legendary movie, "It's A Wonderful Life", this story tells of the ghostly return of the legendary "Sir Stan", to inspire and mentor a young football protege, Jamie, who is in danger of going off the tracks and heading towards a very dark and bleak future. The story straddles the world of professional "Premiere League" football in the UK and the "MLS" game in the USA. As a voice against racism, drug abuse and petty crime, the project was endorsed by the United Nations for promoting better values in society. Tony has never given up on this film, as it is a story that needs to be told,  - especially considering how our world is today!

THANK YOU STAN ~ 100TH BIRTHDAY TRIBUTE: While working on the "SPIRIT OF THE GAME" promotional trailer, Tony discovered that the 100th anniversary of Sir Stanley Matthew's birth was about to occur. He therefore made this short "THANK YOU STAN" online tribute, with a view to generating interest in the greater project - as well as to celebrate the life of a great man, of course!

"THE INK THIEF" 1994  ~ COMPILATION: The first TV drama series Tony directed! Aimed at UK family audiences, and working with extreme time and budget pressures, the series still became a minor cult TV classic in the UK! It is also a project that Tony has always believed could become a major cult movie around the world. Check it out and see if you think that there's room for a dark, scary, surreal movie like this - with a distinct Tim Burton edge to it - in the modern cinema. It's definitely something Tony would still love to take on once more - given a a larger budget, a more expansive screenplay, and given the chance!

THE ADVENTURES OF UNCLE LUBIN - PROMO & POSTER: Tony has always been a huge fan and admirer of the work of the iconic British artist and humorist, William Heath Robinson. Working for years trying to get a full length movie on the life and works of the great man made, Tony joined forces with the late, great film producer, Simon Channing Williams, and acclaimed British actor, David Thewlis, to create this short promotional trailer for "THE ADVENTURES OF UNCLE LUBIN". Sadly, Simon Channing-Williams passed away shortly after the trailer was completed, effectively making it very difficult to find production funding for the project after that. The trailer was shot on 35mm film, with the only viewable versions today, being several generations video copies of the original - hence the poor quality of the trailer above. On a more positive side, this trailer was used to support the promotion - and eventual, successful funding - of the wonderful Heath Robinson Museum, in the UK. The poster design below - designed to attract funding and support for the project, gives a much clearer idea of the quality and charm the final movie would have had. 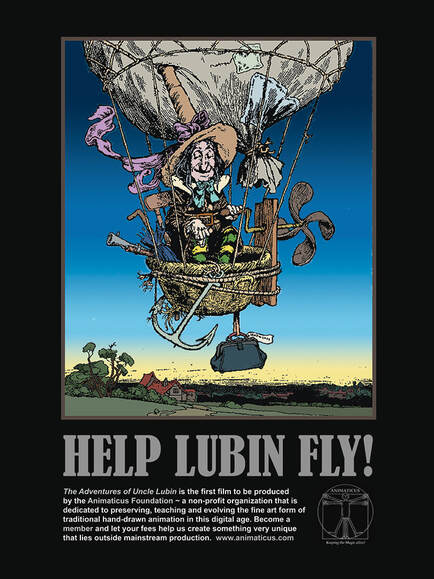 "ANIMUS PRODUCTIONS" - ARCHIVE SHOWREEL: Here is a brief compilation of work created over a 20-year period, at Tony's London-based animation studio, Animus Productions. The studio was closed down in 1998, when Tony moved to live and work in the USA. This showreel is just the tip of an iceberg, compared to the over 200 TV Commercials, 2 TV Specials and several short films that was created there in it's time.

THE LONELY LITTLE e - WORK-IN-PROGRESS: One of Tony's personal "hobby" projects during the early days of his London studio, was the work he began on his children's typographical fairytale, "THE LONELY LITTLE e". It was to be dedicated to his young daughters at the time - Sarah and Anna. Sadly, the studio production work prevented him from ever finishing the film and his daughters grew up to have children of their own. (Although Tony would still now love to finish the film - for his grandchildren and recent great-grandchild if nothing else!)

"CULPEPER" PROMO - WORK-IN-PROGRESS: On another level of his life entirely, Tony has always wanted to animate a movie on the life and works of the amazing British, 17-century, herbalist/astrologer, Nicholas Culpeper. This is just the barest beginning of the "CULPEPER" trailer he planned to make - to promote the project. Alas, it was never taken any further than it is now.

FIRE GODS - STUDENT COLLABORATION SHORT FILM: One of the great pleasures of Tony's life is teaching animation to young students. He feels that it is extremely important that they get production experience, in addition to a regular classroom education on the subject. With this in mind, he approached the Glass Museum of Tacoma, to create this short, history of glass and glass-making - "FIRE GODS" - using his students as the full production team, supporting his involvement with the project. Although the budget was minimal, it did provide Tony's students with a wonderful opportunity of working on a project that they had a major role in creating over their summer break.

"HOKUSAI ~ AN ANIMATED SKETCHBOOK": Tony has always been a huge admirer of the great Japanese artist, Katsushika Hokusai. Tony has always considered Hokusai as the "Leonardo da Vinci of the East". It was fitting therefore that this first ever short animated film - "HOKUSAI ~ An Animated Sketchbook" -  should be a biographical piece on the life and works of the great man. The film was a huge success in taking animation away from it's stereotypical "cartoon" image - winning for Tony a British Academy Award in the process!

ENDANGERED SPECIES - STUDENT COLLABORATION SHORT FILM: Another of Tony's student collaboration films was "ENDANGERED SPECIES" -  a short film detailing the rise, fall and hopeful rise again of traditional hand-drawn animation in the USA. Despite having no budget whatsoever, the film made a strong representation of the status of traditional hand-drawn animation in the States.

"ENDANGERED SPECIES" - TITLE CREDITS: Being that there were film length limitations of films being uploaded onto YouTube during the early days of the platform, it was necessary for me to post this credit title sequence  for "ENDANGERED SPECIES" completely independently of the actual film!