"THE OLD MAN MAD ABOUT ANIMATING"

Tony White's life-affirming animated film and graphic novel memoirs.
A Patreon appeal.
"This heartfelt project is destined to be my life's work
~ I've just had to live my life first to make it!"
~ Tony White.

An early test (and still incomplete) piece for the opening of "The Hermit" - a more philosophical part of my "animated memoirs", which weaves it's way through the more animation-centric documentary, "The Old Man Mad About Animating".
The trailer below is entirely complete however...
Imagine a film & graphic novel scenario where an award-winning animator - still as much in love with drawing animation as they were at the start of their 5-decade career - is seen at their drawing board for a typical day in their ever-animating life.  They're working on a film they hope will become an inspiration for traditional hand-drawn animators everywhere. Imagine also that as they draw their mind wanders – retelling incredible animated stories of things from their past, present and future. Next imagine that they're also haunted by a crazy animated muse of their own imagination - let's call him “Arnie” for the sake of this scenario - who is the catalyst for prizing out of the animator every amazing encounter, every profound thought, every meeting with inspirational people ~ in addition to much of the animation knowledge the animator has acquired over the years. "The Old Man Mad About Animation" is THAT film and is THAT graphic novel, and I am THAT old man. All the stories are true of course ~ just the animated character names have been changed, to protect the IP! 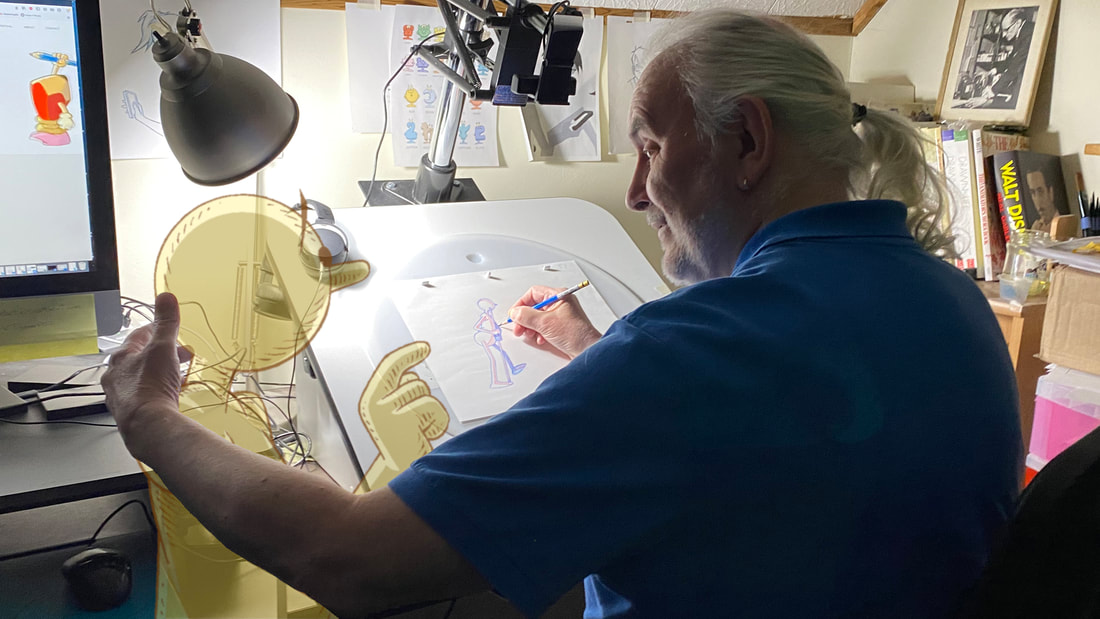 When the muse arrives you have no choice but to befriend it!

P.S. Did I mention that muse Arnie thinks a great deal about himself - and often pushes-in to distract the animator has he works? Unfortunately, he's also a great source for ideas however, and therefore a necessary evil!

Maybe also some of my early concept art for the project will give you a sense of just the depth and breadth of where this whole thing is going. Art-people and places I plan to visit in this creative pilgrimage include Ralph Steadman, Richard Williams, Frank Thomas, Ken Harris, Art Babbit and the Great Pyramid in Egypt with it's distant connection for me to Cecile B. DeMile. There'll also be some very other-worldly, mystical and magical moments re-created along the way too - with some quite scary childhood nightmares thrown into the mix too! 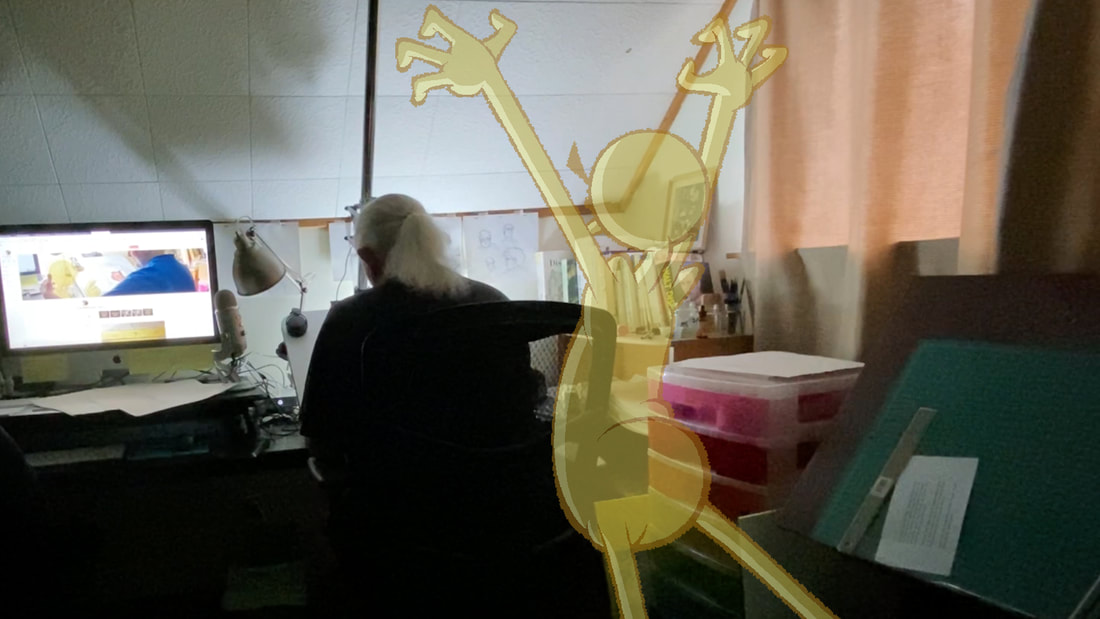 ARNIE is no respecter of age or reputation!

Initial Post-It note storyboard for the above "attack" scene with Arnie and Tony. 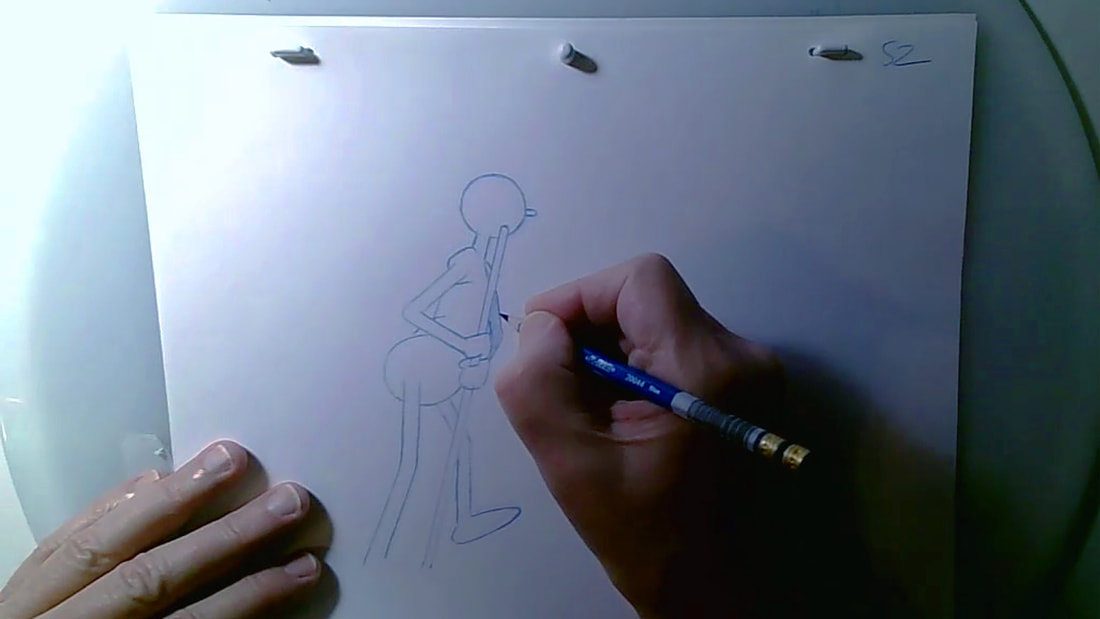 Drawing Arnie is the least of my worries! 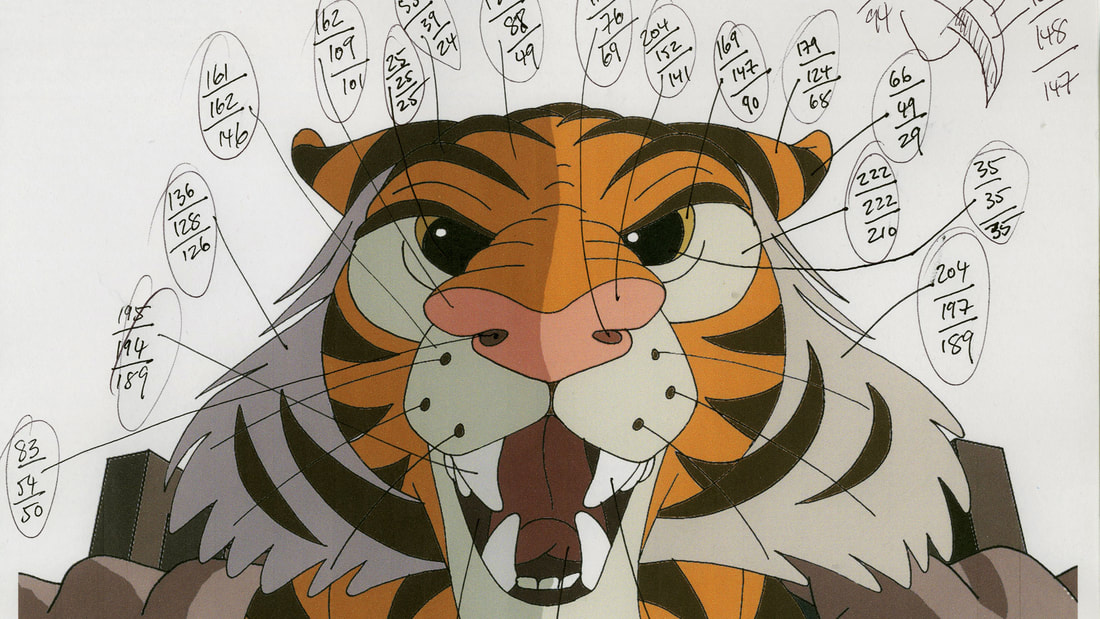 Childhood nightmares and fears play a huge role in how my life, and this film, turns out! 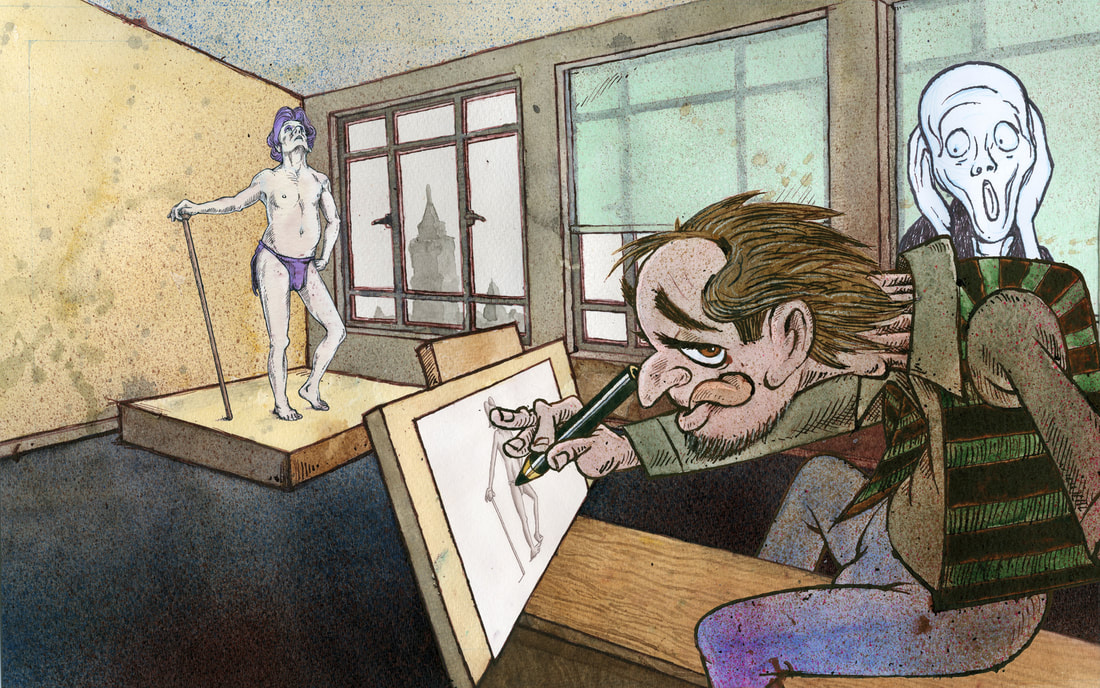 Drawing skills were learned the hard way during my Ralph Steadman classes at art school! 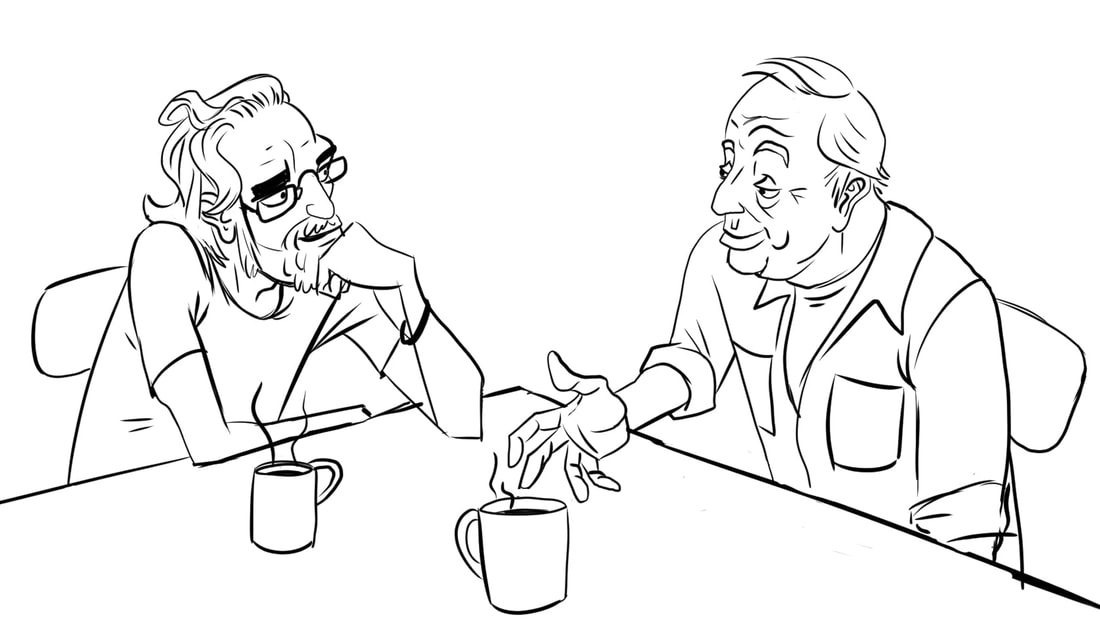 Apprenticing with Richard Williams at the beginning of my career ensured that there are a number of great stories to tell!
(Artwork by Andrew Sharp.) 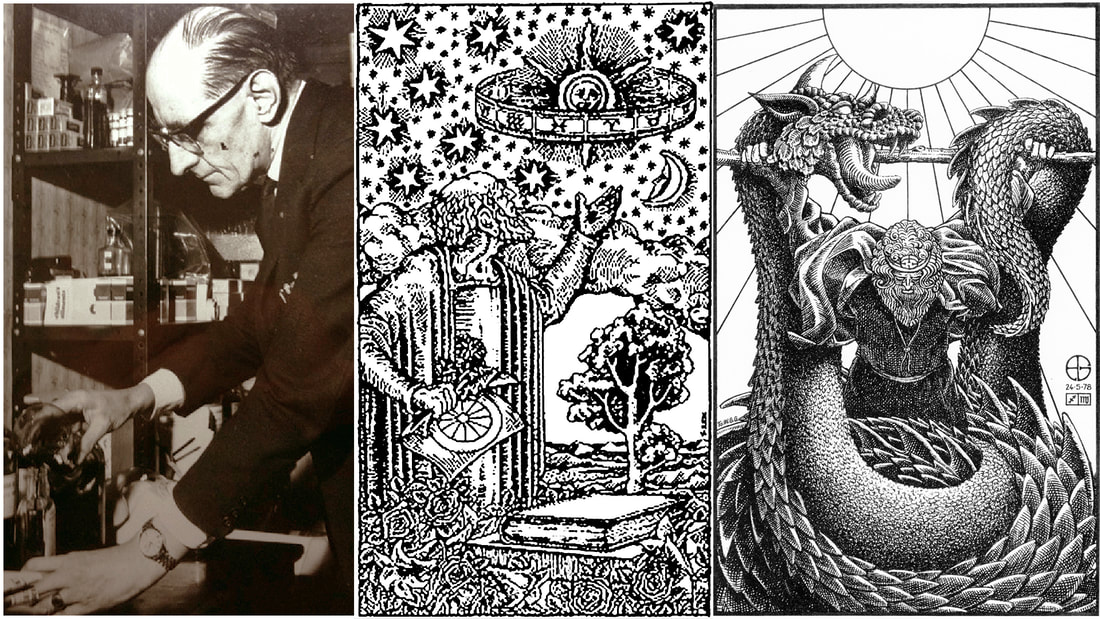 Meeting Samuel H. Weir in a dark and dusty herbalist shop in East London, during my teenage years, was like meeting "Merlin"! It was a relationship that significantly affected my inner growth, my self-understanding and my personal metaphysical illustrations! 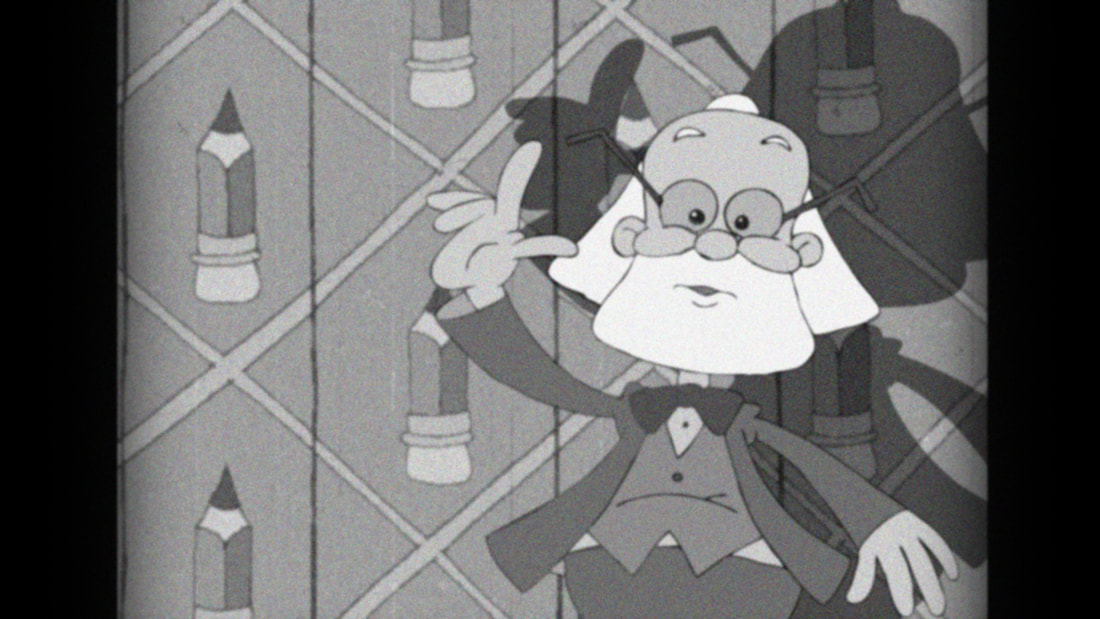 Decades after it was initially recorded, the soundtrack that Professor Stanley Unwin recorded for my showreel all those many years ago is now featured in the current film - through the Max Fleischer antics of "Professor Peanut"!  (As my wife likes to call him!) 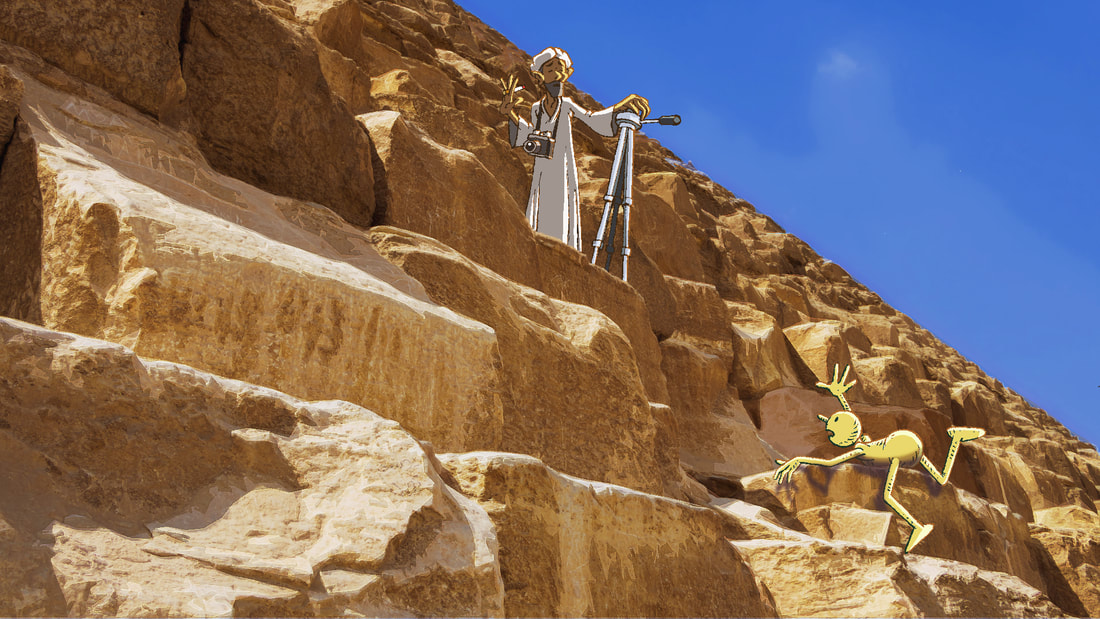 Climbing the Great Pyramid in Egypt for animation research was an amazing experience for me - although not quite as amazing as the story I learned from my guide, which linked me to Cecil B. Demille! 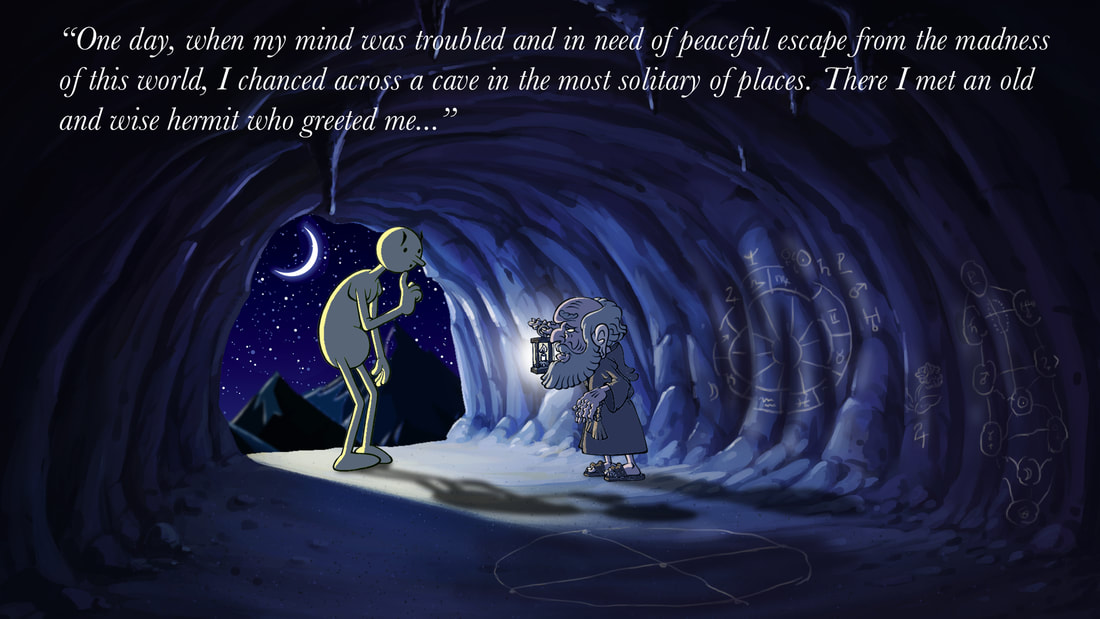 "The Hermit" is a very special character to me. Therefor the Hermit stories I tell in the film - stories I received from a number of dreams I experienced over a number of months way back - are now included in inspirational meditative animation sequences. 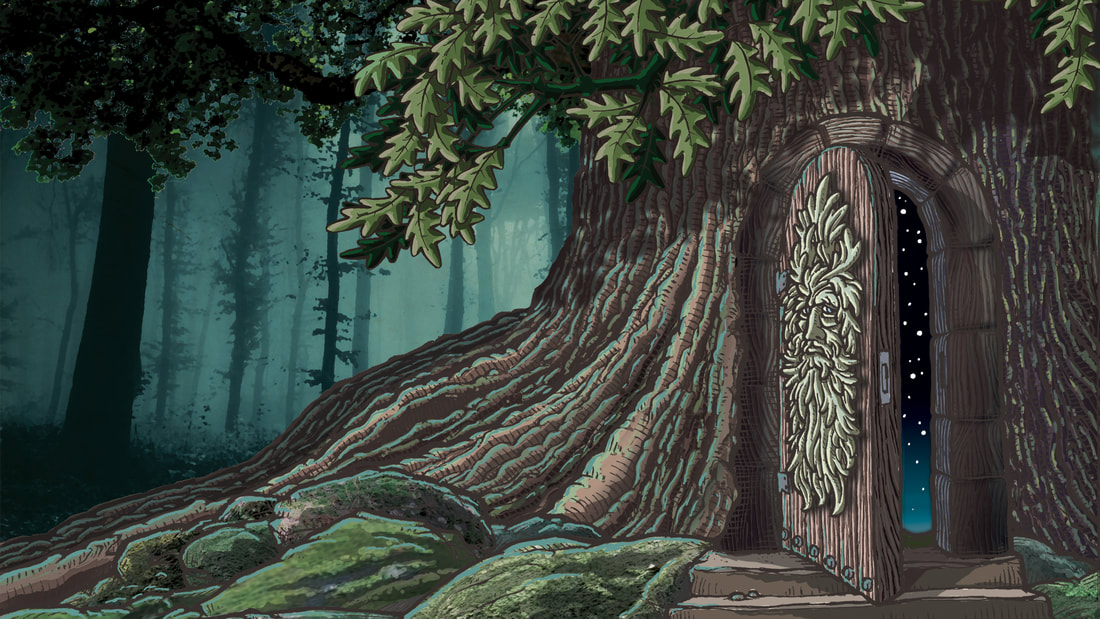 The deeper story of our innermost lives is somewhat told already in my "MADA and the Magic Tree". screenplay. However, in the film I will open the door in this magical tree and reveal at least one of the mystical adventures that lie inside. 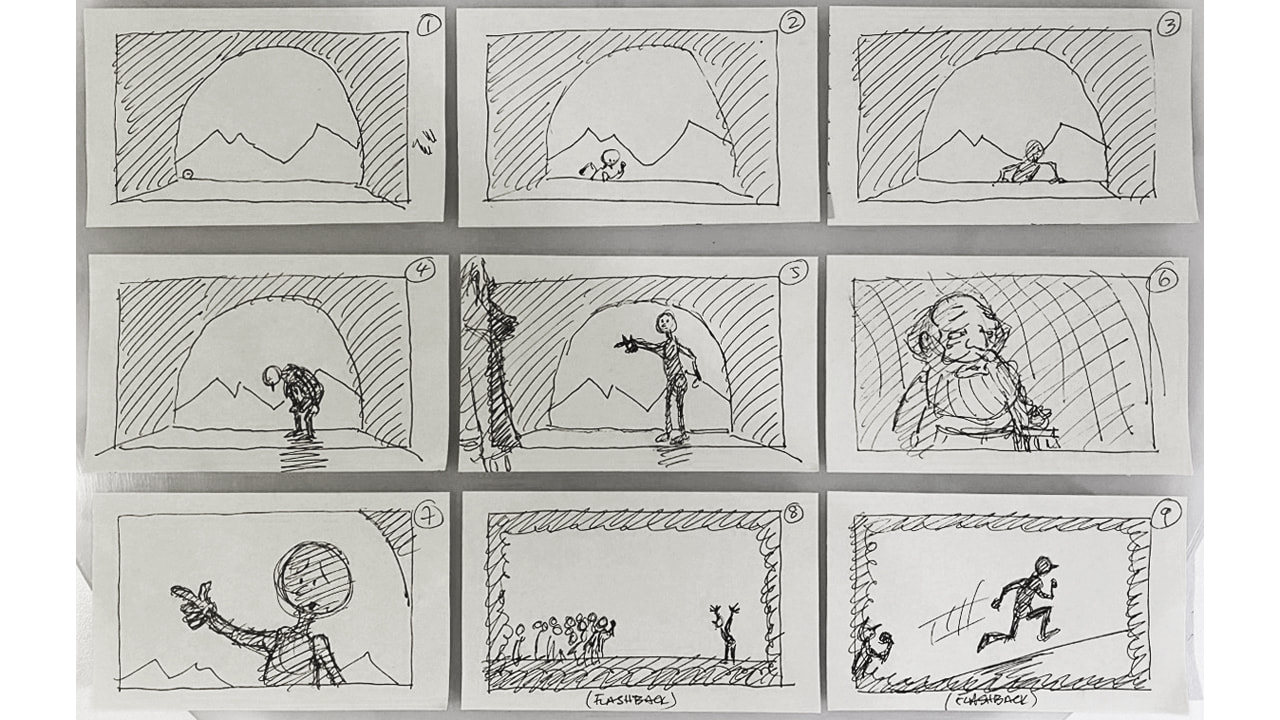 Early storyboard thoughts on Post-It notes for the "arrival" scene at the Hermit's cave.

So, please support this crazy artist/animator in his old age – allowing me to pass the time productively in my retired dotage. Your support will also help me bring in many other aspiring animators to work on the project, ensuring a great diversity of styles and opportunities for them that may not otherwise exist. I would like to apprentice some of my more talented young animation students as well, should your support allow me to.

So, if you're in a supporting frame of mind, then please go to my Patreon page. There are some pretty nifty rewards there for you, if you can support me - so it may well be worth a visit.

Oh ~ and if you don’t support me by the way, then I’ll probably be forced to send Arnie your way. He knows where you live after all!

Thanks for donating whatever you can folks. It will be greatly appreciated ~ and very well used!

Tony White.
Director/Artist/Animator for “The Old Man Mad About Animating”.